Noelani Goodyear-Kaʻōpua is a Kanaka Maoli who was born and raised in Hawaiʻi. She works as a professor in and chair of the political science department at the University of Hawaiʻi at Mānoa, where she teaches Hawaiian and Indigenous politics. A lifetime student of and participant in Hawaiian movements, Noelani’s research has involved documenting, analyzing and proliferating the ways people are transforming imperial and settler colonial relations through Indigenous political values and initiatives. Her books include The Seeds We Planted: Portraits of a Native Hawaiian Charter School, The Value of Hawaiʻi, 2: Ancestral Roots, Oceanic Visions, and A Nation Rising: Hawaiian Movements for Life, Land and Sovereignty. Her most recent book, Nā Wāhine Koa: Hawaiian Women for Sovereignty and Demilitarization (UH Press, 2019) is a collaboration with four activist women elders who played key roles in catalyzing the contemporary Hawaiian movement. Noe is an award-winning teacher, who was recognized in 2019 with the UH Board of Regents Medal for Excellence in Teaching and the Dr. Amefil Agbayani Faculty Diversity Enhancement Award. Her commitment to Indigenous education spans the last two decades; Noe is a co-founder of Hālau Kū Māna public charter school and an active board member of the Kānehūnāmoku Voyaging Academy.

Dr. Tana Joseph is a South African astronomer currently based in the UK. She completed her PhD at the University of Southampton in 2013. Her research area is X-ray binary stars outside our Milky Way Galaxy. Dr. Joseph has studied and worked in South Africa, the US and the UK, thereby gaining a broad understanding of the challenges faced by traditionally marginalised groups in science academia around the world. As a black woman in science, she uses her platform and PhD status to challenge the prevailing toxic academic culture and support her junior colleagues in their journey through an often hostile environment. Dr. Joseph is also an avid science communicator and has started her own company to assist STEM practitioners in their communication and EDI efforts.

I currently work as Research Fellow in International Development within AstrobiologyOU. My interest is in critical Development Studies and issues of justice, equality and ethics. In my role, I look at how postcolonial and decolonial studies can contribute to current debates on knowledge production within space science and to decolonising astrobiology research methods. My research also explores how space technologies are used in International Development programmes funded by different Space Agencies to understand how effective they are at changing people’s lives. This strand of research utilises and adapts the theory of ‘Inclusive Innovation’.

I hold a PhD in Postcolonial and Cultural Studies awarded by the University of Naples, L’Orientale (Italy); my doctoral work looked at appropriations and adaptations of Shakespeare in India and led to the publication of the edited volume Shakespeare in India (Editoria e Spettacolo, 2012). In my postdoctoral research, I continued working on the relationship between literary productions and politics in the ERC-funded project ‘Citizenship after Orientalism’ led by Engin Isin. My monograph Acts of Angry Writing (Wayne State University Press, 2015) is based on fieldwork in tribal communities in Northern India. It demonstrates how big infrastructural projects, like the Sardar Sarovar mega-dam, or the constraints of the postcolonial legal systems have marginalised indigenous populations. More broadly, I have published on gender, citizenship, and visual arts. 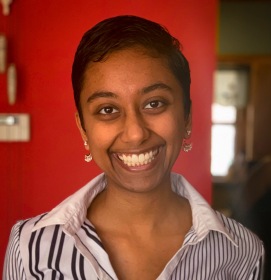 Divya M. Persaud is a planetary scientist, writer, and composer. Divya’s research has spanned mission development and operations; the surfaces and interiors of Mercury, Mars, and the icy moons of Saturn; and meteorites and the asteroids they come from. She is currently pursuing her Ph.D. at UCL’s Mullard Space Science Laboratory, where she is applying 3D imaging to understand the landing site of the Curiosity rover. Divya is also concerned with how to center justice work and democracy in planetary science; she has recently co-authored commentaries in Nature and Physics World criticizing the term “quantum supremacy,” written on the naming of Kuiper Belt object MU69, and spoken on the coloniality of “space exploration” at the Decolonise STEM Symposium.

Divya’s art focuses on manipulating genre, form, and media to address the “geobiographies” of human experience. Her 2017 album, THEY WILL BE FREE, is a postcolonial imaginary of “space exploration” in the context of war and forced migration. Her recent poetry confronts colonial naturalist texts about South America using traditional poetic forms as well as post-modern, music-poetic hybrid forms. Both her science-justice work and poetry have been featured in international publications and on international stages. 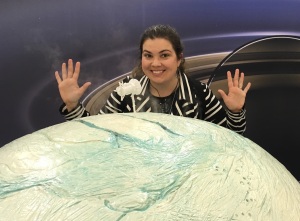 Dubbed “Margaret Mead among the Starfleet” in the Times Literary Supplement, Janet Vertesi is assistant professor of sociology at Princeton University, where she specializes in the sociology of science, technology, and organizations. Her past decade of research, funded by the National Science Foundation, examines how distributed robotic spacecraft teams work together effectively to produce scientific and technical results. She is the author of Seeing Like a Rover: How robots, teams and images craft knowledge of Mars (Chicago, 2015), co-editor with David Ribes and others of digitalSTS (Princeton, 2019) and author of the forthcoming Shaping Science: Organizations, Decisions, and Culture on NASA’s Teams (Chicago, 2020).

Dr Syed Mustafa Ali is Lecturer and convenor of the Critical Information Studies (CIS) research group in the School of Computing and Communications at The Open University. His transdisciplinary research focuses on developing a hermeneutic framework grounded in Heideggerian phenomenology, critical race theory and postcolonial/decolonial thought, and using this framework to explore how race, religion, politics and ethics are ‘entangled’ with various technological (more specifically, ICT) phenomena. In this connection, he has published work in the area of Decolonial Computing and Algorithmic racism, interrogating Trans-/Posthumanism, the discourse of ‘Big Data’ and internet governance. Lucianne Walkowicz is an astronomer at the Adler Planetarium in Chicago and the 2017-2018 Baruch S. Blumberg NASA/LOC Chair in Astrobiology. Walkowicz studies the ethics of space exploration, stellar magnetic activity, how stars influence a planet’s suitability as a host for alien life, and how to use advanced computing to discover unusual events in large astronomical data sets. Walkowicz is the founding director of the LSSTC Data Science Fellowship Program, an initiative to provide astronomy graduate students with training in advanced computing. Walkowicz speaks and writes regularly on topics at the intersection of science and society, which have appeared on TED.com, Slate, The Washington Post, Vox, and more. Walkowicz holds a BS in Physics and Astronomy from Johns Hopkins University, an MS and PhD in Astronomy from the University of Washington, and held postdoctoral fellowships at UC Berkeley and Princeton prior to joining the Adler Planetarium. They are also a TED Senior Fellow and a practicing artist, working in a variety of media, from performance to sound. 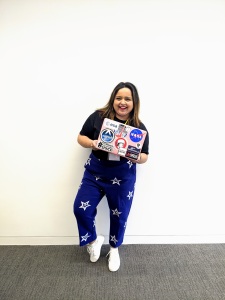 Anu is part of the Verification and Monitoring Team at VERTIC, an international security NGO whose mission is to support international agreements and related regional and national initiatives, with particular attention to issues of monitoring, review, legislation and verification. Anu currently works specifically on technical and policy issues surrounding nuclear weapons disarmament and non-proliferation, and is developing a career in space policy and verification. Anu is currently the UK Director of Women of Color Advancing Peace and Security, a organisation dedicated to advancing the leadership and professional development of women of color in the fields of international peace, security, and conflict transformation, so that they can champion minority perspectives to solve global issues. She is currently on the board of British Pugwash and a member of the Younger Generation Leaders Network. She was previously the Chair of UKSEDS, the national space charity. 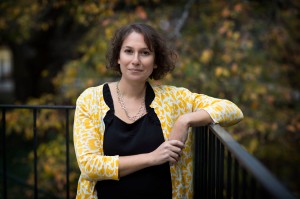 Lisa Messeri is an assistant professor of sociocultural anthropology at Yale University. Her research concerns how science and technology stretch our imagination of what place is and what it means to be in place and in the world. Messeri’s first book, Placing Outer Space, examines how scientists transform planets into worlds. Her current research, supported by an NSF Scholars Award, focuses on the virtual reality community in Los Angeles and the efforts of this community to establish VR as a different kind of tech industry, one that values equality and representation. In addition to academic writing, Messeri has had essays published in The New York Times, Slate, and Motherboard. Her research has been featured in Wired, PBS’s NovaNow, and on CNN. Messeri received her SB from MIT in Aerospace Engineering in 2004 and her Ph.D. in MIT’s program in History, Anthropology, Science, Technology, and Society in 2011.

Monica Vidaurri is a student at George Mason University currently working towards a Masters in Biodefense. Her undergraduate degrees are in biology and government and international politics with a concentration in law, philosophy, and governance. Originally from San Antonio, Texas, Monica moved to Washington, D.C. in January of 2017 to do a semester internship in the United States Senate. That internship turned into various jobs across the government, non-profit sector, and even science societies. Monica now works at NASA Goddard Space Flight Center, where she is an astrobiologist and policy and ethics specialist. Monica’s astrobiology experiences include exoplanet atmospheres and ionospheres, and exoplanet characterization. Her policy experiences lie in international law, ethics, and space policy. The two fields meet at the intersection of biodefense, bioethics, and planetary protection, which fuels her passions in ensuring humanity adopts proactive, transparent, and ethical standards of space exploration, as well as bridging the gaps between the science world and the policy world. Monica is also a musician, and teaches high school and drum corps brass and visual ensembles. 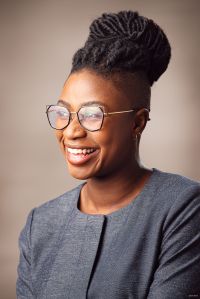 Ufuoma Ovienmhada is a masters student in the Space Enabled Research Group, led by Professor Danielle Wood, at the MIT Media Lab. Space Enabled works to design space technology to be more accessible and more applicable to sustainable development on Earth. In her research, Ufuoma creates low-cost data tools to enable the management of an invasive plant species that grows on Lake Nokoue in coastal West Africa. To design this tool, she combines community centered design techniques, satellite data analysis, in-situ water quality measurements, and drone data for validation. Prior to arriving at MIT, she graduated from Stanford University with a B.S. in Mechanical Engineering. 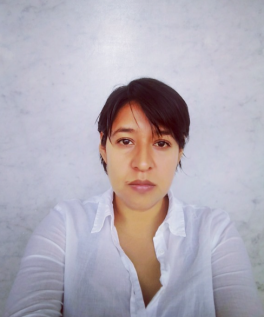 Cintia Durán is manager in the subjects of image and science. She has a degree in Audiovisual Media by the Center for Audiovisual Art and participated in various workshops specializing in art, code, and science. She is the co-founder of Generador a platform on education and research of technology and contemporary art. Within Generator, she develops and works as a teacher and coordinator of the 1×1, FGfest and Tlaloque projects. Her photographic and artwork have been exhibited in different states of Mexico and abroad. She has presented papers on the use of art and photography for science dissemination within the International Astronautical Congress 2016 and 2018 (IAC) and CAP Conference Communicating Astronomy with de public 2018 in Fukuoka, Japan. During 2018 she was a FONCA Young Creators fellow, carrying out an investigation on the climate and meteorological behavior of the city of Guadalajara, Mexico. She was a Falling Walls Engage finalist during the Falling Walls 2019 Conference and is currently conducting research for the creation of a visual archive on meteorite collections in Mexico.